This blog post was originally published at videantis’ website. It is reprinted here with the permission of videantis.

We kicked off the new year with the largest consumer electronics show on the planet again: CES. The show was about the same size as last year, with the show floor growing a bit from 2.7 million square feet to over 2.9 million feet, but with slightly fewer exhibitors than last year’s 5,000. CES is the place to be to see the latest in tech, but for us it’s primarily a show to meet with our many customers and partners in our suite at the Westgate, located right at the convention center, showing them our latest developments and demonstrations. 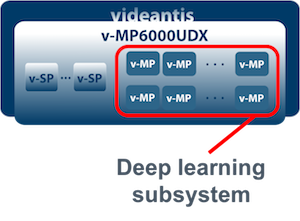 Our processor and software solutions continue to expand and capture more market share. One of our key markets is automotive ADAS resulting in us showing different intelligent camera demonstrations. We’re working with several Tier 1s and OEMs on next-generation safety products. We’re excited to know that your next vehicle is likely to have a videantis processor on board somewhere, performing a wide variety of visual computing tasks, making your ride safer and more relaxing.

We also demonstrated our v-MP6000UDX processor, which can run a wide variety of visual computing tasks. The architecture efficiently runs deep learning workloads at extremely low power levels, while remaining software programmable. Our v-CNNDesigner mapping tool, which translates neural network models into parallelized and optimized software that readily runs on the v-MP6000UDX, was also on display. In addition, we showed our structure from motion/SLAM solutions, our ultra-low delay H.264 codec for automotive Ethernet, and OpenCV acceleration.

Historically CES focused on consumer electronics only, but since vehicles have a bigger and bigger electronics component to them, CES is quickly turning into an automotive show. Our cars are quickly becoming electronic. Of course, there’s a key trend to replace the engine and fuel with electronic motors and batteries, but electronics is also playing a much bigger role in the user experience for the driver and passengers in the vehicle, to ensure the car drives itself, and to prevent accidents. The result: our vehicles of the future have many displays, many sensors, and of course must have very high-performance compute units to intelligently process all the data.

Here’s just a few examples of automotive announcements from CES. Mercedes-Benz showed its latest concept car, which has solar panels that power its neuromorphic hardware that consumes just a few watts. Hyundai announced they will make flying cars for Uber’s air taxi service. The ride-hailing company has said it wants to perform its own test flights in 2020 and plans to launch some version of an air taxi service in 2023. Verizon and HERE announced they’re working together to increase road safety and enable better navigation, using their 5G, edge compute, mapping and AI technologies. Volkswagen announced the opening of its new autonomous vehicle research and development subsidiary in Silicon Valley, Volkswagen Autonomy. Bosch showed an LCD display which is integrated into the windshield, intelligently darkening sections through which the sun or other light sources would dazzle the driver. Qualcomm announced its Snapdragon Ride autonomous driving solution. Valeo unveiled an autonomous, electric delivery droid, developed with China’s Meituan Dianping. Toyota even revealed plans to build a prototype city of the future, specifically designed to test and develop technologies such as autonomy, robotics, personal mobility, smart homes and artificial intelligence.

This is just a small selection of the automotive announcements at CES. There are 1.2 billion vehicles driving on the world’s roads today, which is a lot less than the 3.5 billion smartphones in the world, but if you compare the $30K average price of a vehicle to the average price of $300 for a mobile phone, you can imagine that automotive is a big market and has attracted the attention of all electronics companies in the world, turning CES into the largest automotive show of the world.

To many, Sony is primarily known for its audio, television, and gaming console products. Most of you probably know that Sony is also the largest image sensor manufacturer in the world, supplying them to Apple’s iPhone for instance. But at CES Sony made a surprise move by showing it can also build a car. The VISION-S concept vehicle is a prototype, but is spec’d remarkably accurate, stating a top speed of 240 km/h, 4.8 seconds from 0-100 km/h, and a sensing system that includes 13 cameras, 5 radars, 12 ultrasonic sensors, and 3 Lidars. It’s exciting to see Sony make such a big step and we’re looking forward to seeing the VISION-S develop further.

Even though YouTube was created in 2005 and Netflix started streaming in 2007, many video-based online services and apps are still rapidly growing. Quibi had a big launch at CES, announcing they will launch in April, releasing 175 original shows and 8,500 short episodes in the year following its launch. TikTok’s explosive growth based on its strategy of allowing users to create short videos with music and filters remains a topic of discussion, and NBCUniversal announced it is launching its Peacock video streaming service this year. Combine these new developments with the increasing capabilities of posting video-based “stories” in many social media applications, and it is clear the amount of video capturing, storing, compressing, distributing, and playing that happens around the world is experiencing tremendous growth. Our processing solutions are optimized to process, analyze, and handle video content, and we’re eager to continue working with our partners to efficiently process these billions of streams of video data.

AI was dominant throughout the show floor and is destined to be a key technology over the next decade. Almost any new product that was announced included some AI component, whether it’s robots, smart homes, health solutions, entertainment, sports, marketing, or smart cities, adding an AI component allows a better user experience and increased features. AI-processing solutions revolve around five things:

Our AI processing solution has been architected to scale from very small wearable systems to high-performance datacenter solutions and ticks all the above boxes.

CES was a blast again and it’s always a nice event to kick off the year with. For videantis, 2019 was the most successful year ever in terms of shipping products and revenue. Based on the feedback we received at CES, we’re excited about what 2020 will bring. Our experience in designing and developing semiconductor and software solutions that bring new visual computing and AI applications to next-generation devices and vehicles has set us up well for the massive shifts we’re seeing in the consumer electronics and automotive markets. We’re looking forward to working with our customers and partners in 2020 and beyond.