The PowerVR Imaging Framework for Android

In a previous article about heterogeneous architectures, I identified memory bandwidth as the main bottleneck for implementing power-efficient algorithms for computer vision.

Luckily, Imagination has created an innovative solution designed to address this common issue in mobile and embedded devices – and it comes in the form of the PowerVR Imaging Framework.

The PowerVR Imaging Framework for Android comprises a set of extensions to the OpenCL and EGL Application Programming Interfaces (APIs) that enable efficient interoperability of software running on PowerVR GPUs with other components such as a CPU, ISP and VDE. These extensions enable the construction of shared memory allocations and software pipelines across multiple hardware components with no redundant memory copies (termed zero-copy).

In addition, the extensions enable direct manipulation of YUV images, required by many computer vision algorithms, and also enable YUV images to be natively read by the GPU and converted to RGB on-the-fly whenever data is read from memory into hardware registers, avoiding the bandwidth cost from otherwise having to first create a copy of the image in memory in RGB format when converting.

The figure below shows the front-end of an image processing software pipeline in Android, which implements a zero-copy flow between the ISP and GPU. The ISP acquires image sensor data which it pre-processes and then writes to an Android Gralloc (graphics allocated) buffer in system memory. In this example the ISP generates the image data in YUV NV12 format, whereby the luminance and chrominance data is stored in two separate planes. The GPU then reads this image data, operating on the Y and UV planes separately. 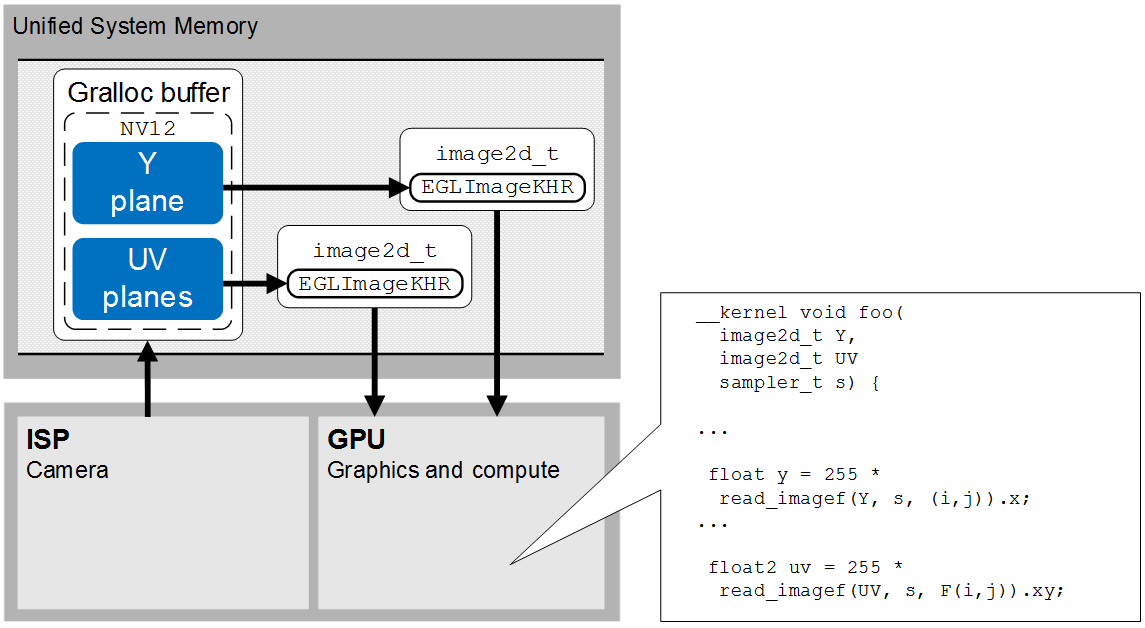 To benefit from the framework’s zero-copy support, the OpenCL kernel is written so that it takes two image parameters and a sampler. The PowerVR GPU performs read (or sampling) operations on variables of these types using a dedicated hardware block known as a Texture Processing Unit (TPU). Sampling the first image returns luminance (y) values, and sampling the second image returns vectors containing chrominance (u, v) pairs.

When sampling the image, the TPU can also be configured to implement features such as image interpolation and border pixel handling. PowerVR Series6 GPUs are based on a scalar architecture, which means that there is no loss of efficiency when operating on individual components of a vector.

The image below shows how the PowerVR Imaging Framework can be integrated within Android, complete with an illustration of an example zero-copy flow. The framework is integrated at the library layer of the Android software stack, enabling efficient interoperability between APIs such as OpenCL, OpenGL ES and emerging APIs such as OpenVX. Code written in these APIs can communicate and share data efficiently on the underlying hardware such as the ISP, GPU, CPU and VDE. In this example, frames of data from the ISP are placed in memory and then streamed directly into the GPU for processing, for example using the zero-copy implementation explained above. For each input frame, the GPU produces an output frame, which is mapped to an EGL_GL_TEXTURE_2D object for rendering to screen. 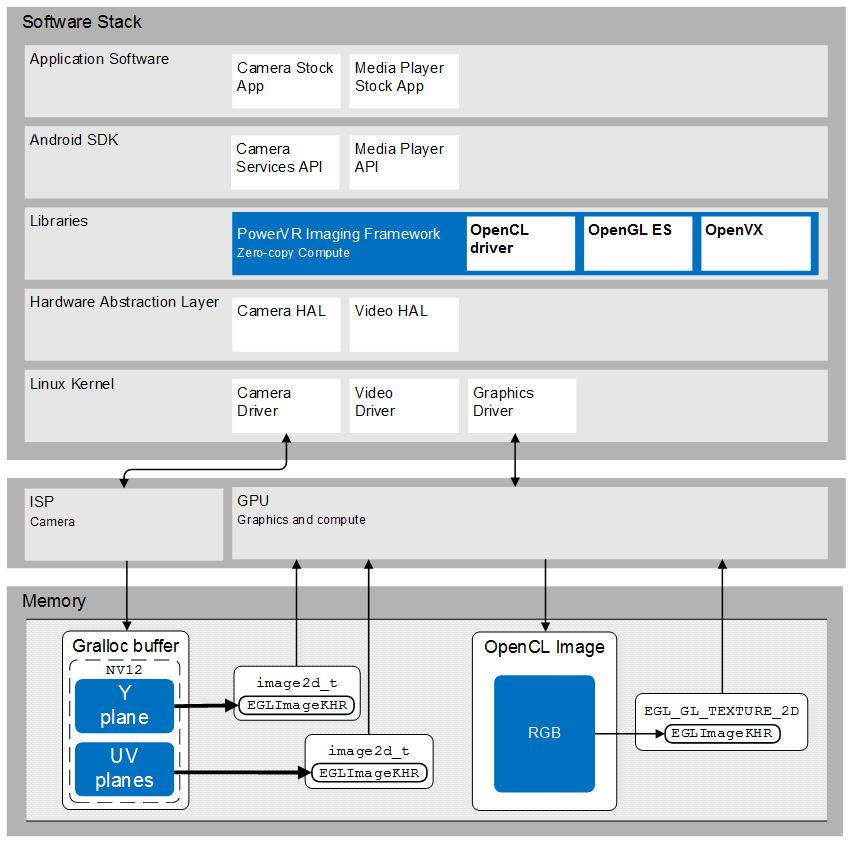 You can find a number of the extensions from the PowerVR Imaging Framework already integrated in a number of mobile devices available today, including the Asus ZenFone 2 ZE551ML smartphone (Intel Atom Z3680 processor, PowerVR G6430 GPU).

Read more about the PowerVR Imaging Framework and how it is used by OEMs in the official press release.