This blog post was originally published at videantis' website. It is reprinted here with the permission of videantis.

1. It can snow in Barcelona!

Since the venue has quite a few areas that are located outside — there’s many outdoor “networking gardens” where you can grab a coffee, sit down, and have a conversation — the snow was a bit of an issue. Many people stayed indoors, resulting in many busy areas and fewer relaxing moments in the sun. We’re looking forward to a dry congress again in 2019! 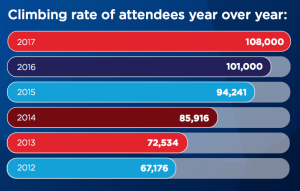 Over 110K people attended the show this year. While everyone seems to own a smartphone or two already, and growth has slowed, the mobile industry is still clearly growing.

We’re a company that’s 100% focused on intelligent camera processing, so we don’t run into every company that targets the mobile industry, but when walking the show floor, it’s still daunting how big the industry is. There’s many companies with huge and what must be very expensive booths who’s names we’ve never ever heard off. There are billions of smartphones in the world, all talking to the internet and with each other, creating more powerful connections every day. This is a big industry and nowhere is this more apparent than at the Mobile World Congress.

Intelligent processing is finding its way everywhere. In handsets, apps, services and infrastructure. Many companies were showing their smart technology powering their product offering. Even more had AI marketing slogans on their booth without a clear indication of how they were using this technology. AI is often hyped, but just as much relevant and clearly paying off. 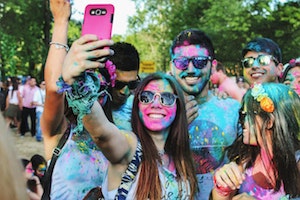 It’s hard to launch a unique smartphone these days. A big high-resolution screen, thin design, and a fast processor are a given. But camera quality is still an area where the phone makers compete and can make a difference. The complexity of the processing chain in the camera is still increasing rapidly, and the computational photography algorithms continue to improve, all with one goal: enhance picture quality.

Many companies were showing camera applications that include face analysis. We saw more robust face detection algorithms that are based on deep learning, several companies showing face recognition for authentication and unlocking the phone, face analysis for high quality portrait and bokeh camera modes, and of course face analysis for finding making animated avatars or animojis.

Even though the mobile world congress is clearly targeted at phones and their applications, the automotive component seems to grow also. Cars are becoming more often connected to the internet, connected to infrastructure, and connected to each other, all of which need mobile connections. Also, smart sensing and cameras have been key topics in mobile for a while, as they are in automotive. Case in point for automotive growing at the MWC: both Mercedes/Daimler, BMW, Seat, and Continental had booths at the show. 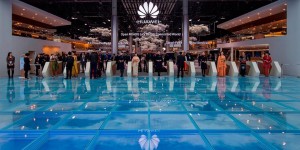 Samsung, Nokia, Qualcomm, and VMWare all had big booths but with nearly 6400m2 of space, Huawei went all in again at the Mobile World Congress, just like previous year. Ericsson comes in second with 6000m2 of valuable booth space. Huawei’s entrance was impressive again, just like last year. The booth again was invitation-only with the entrance being guarded by woman from all over the world dressed in their local folk costumes.

8. Displays moving closer to our eyes

The public showing of ten of Lumière brothers’ short films in Paris in 1895 can be regarded as the start of us humans watching moving pictures on a screen. Thirty years later the screens started moving into our living rooms as TVs and it took another 80 years until in 2007 the iPhone brought video into our hands. Every time the displays moved a little closer to our eyes, making them easier accessible. The next key step is to move the displays right in front of our eyes, in VR or AR systems. While a lot of development on these new systems is still going on behind the scenes, several companies were showing their latest technology at the show.

It was a great show again and for those that we met there: it was great talking to you. Computer vision, AI, cameras, automotive, and intelligent sensing were all key topics at the show. We’re exciting to be in this space and working with some of the biggest names in the industry. See you next year!