Speaking of the Xbox 360…yesterday, Microsoft released Avatar Kinect, a capability first unveiled at Microsoft's early-January Consumer Electronics Show keynote and free to Xbox LIVE Gold subscribers (and to all Xbox 360 users through September 8) from Kinect Fun Labs. The Xbox 360 user interface has incorporated user-customizable Avatars since mid-November 2008; here's what currently mine looks like, from the online Avatar Editor (note to self: it's time for a tweak, you no longer sport a goatee, not to mention that steadily receding hairline…): 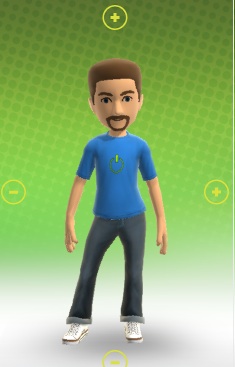 However, although the Avatar has always reacted to user interface actions you initiate with a controller, and although you've always been able to place it in some games, it hasn't dynamically responded to your body motion…until now, that is. Since last November's Kinect launch, the system has used facial detection to identify users, and it's used body motion detection to animate the torsos and limbs of generic avatar characters in games.

Avatar Kinect takes the technology to the next level, not only expanding animation to user-specific Avatars themselves but also animating coarse-grained facial features of those Avatars (not necessarily eyelash-blinks, for example, but eyebrow-raises and smirks). Reviews of Avatar Kinect have been mixed so far (I haven't tried it yet), but I suspect that as with other Kinect-enabled features, the reactivity latency and richness of the experience will expand in the future.

Keep in mind that frame rate and overall responsiveness of the game console remain top priority; nothing Kinect does from an incremental system processing burden standpoint can impact those tier-one parameters. So it's not surprising that, as with the initial wave of Kinect-cognizant games, the embedded vision-enabled features are elementary at first, improving over time with learning curve progress and consequent fine-tuning.

For more, take a look at other recent coverage of the Avatar Kinect unveiling: